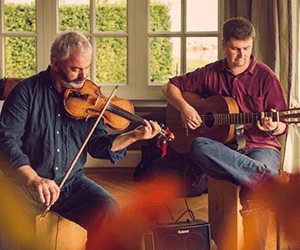 Based in the Westcountry and bringing traditional and contemporary styles on fiddle and guitar to folk tunes and songs from around the British Isles with varied arrangements and great foot-tapping folk music. As well as performing locally in Somerset and Dorset, they regularly play around the U.K. at a whole variety of concerts, festivals, events and venues from small house concerts and parties to large halls and marquees including Glastonbury Festival, Broadstairs Folk Week, Beverley Folk festival and Lyme Folk Weekend. As well as performing concerts on their own, they have supported great musicians such as Ralph McTell and Wizz Jones, the Tim Edey Trio, the Jackie Oates Duo and the Kate Rusby Band.

Acoustic magazine described their second album ‘Circling the Square’ with, “At all times, the interplay between David Mitchell’s guitar and Graham Vincent’s fiddle is quite stunning.”