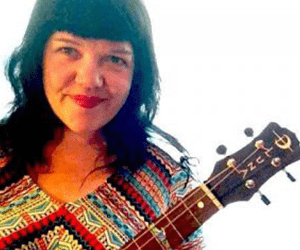 Amy Hopwood is a singer-songwriter based in Weymouth, Dorset, and specialising in folk, indie and original music. She performs solo, singing and playing tenor guitar, and in a duo with Tobias Raven on guitar and bass.

Amy is often described as having a particularly ‘pure’ voice, which creates a curious contrast with the darker subject matter of the songs that she is drawn to. In a typical set you can expect original songs and modern arrangements of old folk songs about feisty women, dastardly murders, shipwrecks, love, lust, and the sea; and covers of brilliant songs by people like Nick Cave, Suzanne Vega, Tracy Chapman, Elliott Smith, Billy Bragg and Leon Rosselson.